Balance Cabin In The Fall

We didn’t know what BC Rivers Day was going to look like this year. There were two great options to celebrate. We could have floated Quick, BC to Telkwa like we did last year. This is a lovely and picturesque float with a ton of great people ending with a gathering and salmon bbq. The other float taking place in the area started at Kispiox Village and ended in Ksan where Rachelle Van Zanten was going to play.

We opted this year to do the Kispiox float since we were closer by and it was a new to us float. (I’m hoping the organisers for the two floats will join forces next year so we don’t have to pick one or the other!) Rachelle Van Zanten joining the float might have also played a part in our decision. I do live with her number one fan- Lily.

This was the first time our friends from Oona had been to our cabin and I think they really enjoyed floating the river with us this day. The day started out foggy but perfectly decent for a float. It wasn’t too cold or raining. More than a hundred people came out to do this float and Skeena Watershed Conservation Coalition did a masterful job organising the event so everyone who wanted to float had a space in a raft. I took so many pictures! If you wanted to see more, clicking on any of these photos will take you to my Flickr page where more are posted.

Floating this day were natives and non natives, elders, children, hippies, red necks and Canada’s best female slide guitarist was in the raft below with her sweet babe. Cam is always so completely happy on the river. It could only have been better had he been fishing along the way. Much of the float was calm and quiet. We rowed along, stopping occasionally to pick up any garbage we’d see along the shore. Garbage was easier to find as we got closer to the residential areas along the river. A few parts of the river had faster moving water which made for some fun. The kids would get wet in the front of the boat and I’d hold on to Ben’s jacket with one hand and the boat with the other. I even put my camera in it’s water proof case before one section of “tough” water, as Leify called it. I try not to be so wimpy on the water but I just can’t help it sometimes. It was really fun to see the war canoe, Many Hands move so quickly on the river. It surprised many of us when we saw it drop over a ledge at Vicker’s Way (?) creating a large wave train downstream! Very cool to see and unexpected considering I think many of the passengers were inexperienced to paddling this boat. It started to rain and get cold by the end of the float and yet there were still smiles on everyone’s faces. I love the people up here. At one point it seemed everyone pulled over to the side of the river for a quick jump up and down to get the blood flowing again. By the time we arrived at Ksan it was quite wet and cold so I didn’t have my camera out. We bought food from local venders and stood around the fire or under a tent to enjoy conversation, balloon making and local music. Rachelle debuted a new song which is AMAZING. It’s powerful and touching and I can’t wait to hear it again. She invited Lily to join her band with a tambourine and singing to which Lily told me her “dreams had come true” when that happened. She happily sang and danced along with the music.

Shannon McPhail snapped this picture of Leify and me which I’m grateful for because I think it’s the only one of me this day! 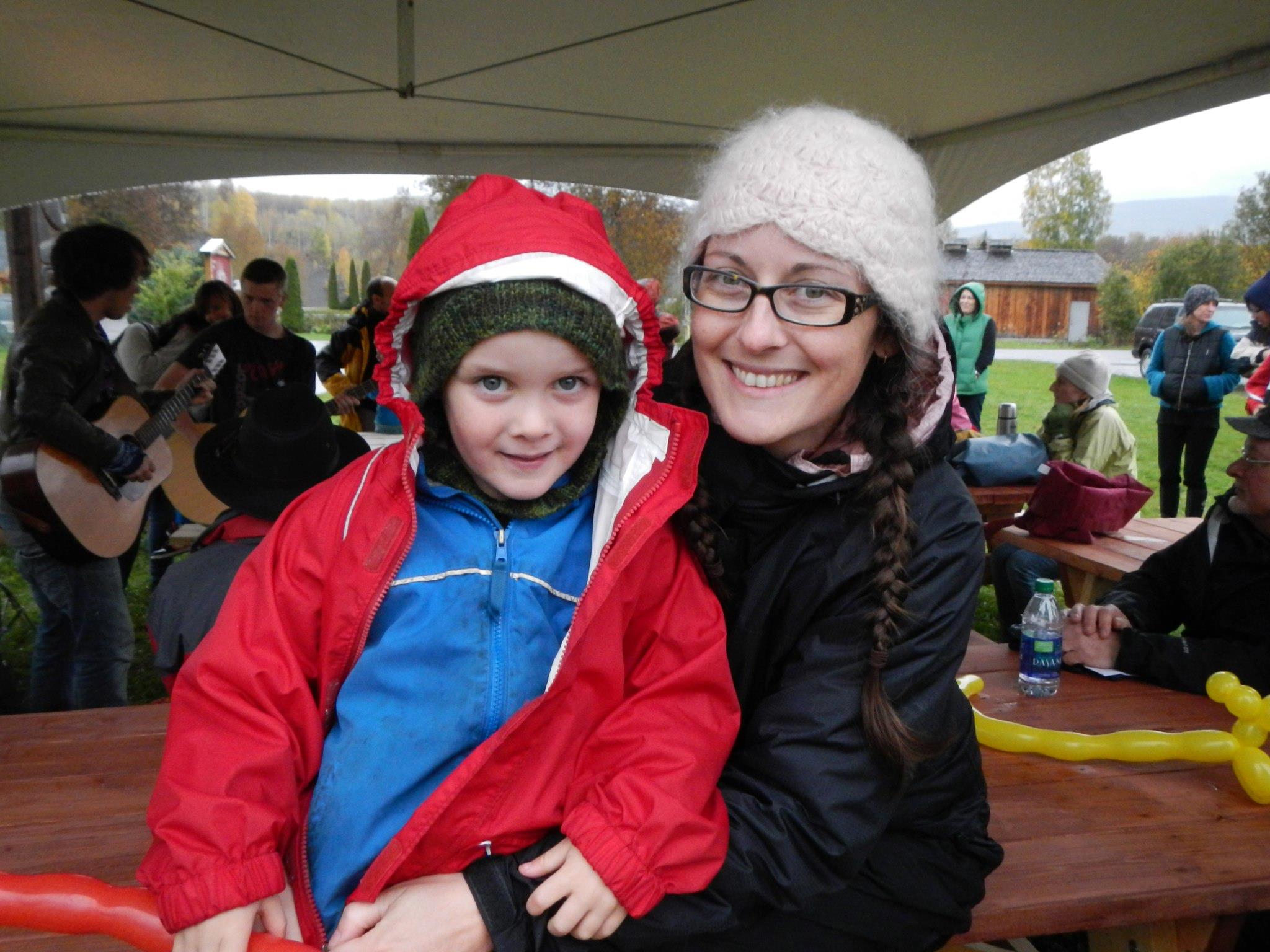 Now I need to get some of these images up at the PICTURES website which was set up to celebrate our BC rivers and waterways with stories and pictures.

Did you celebrate Rivers Day?! I’d love to hear how.